Inspections, Blowing Insulation And Hanging Drywall For Your Custom Home 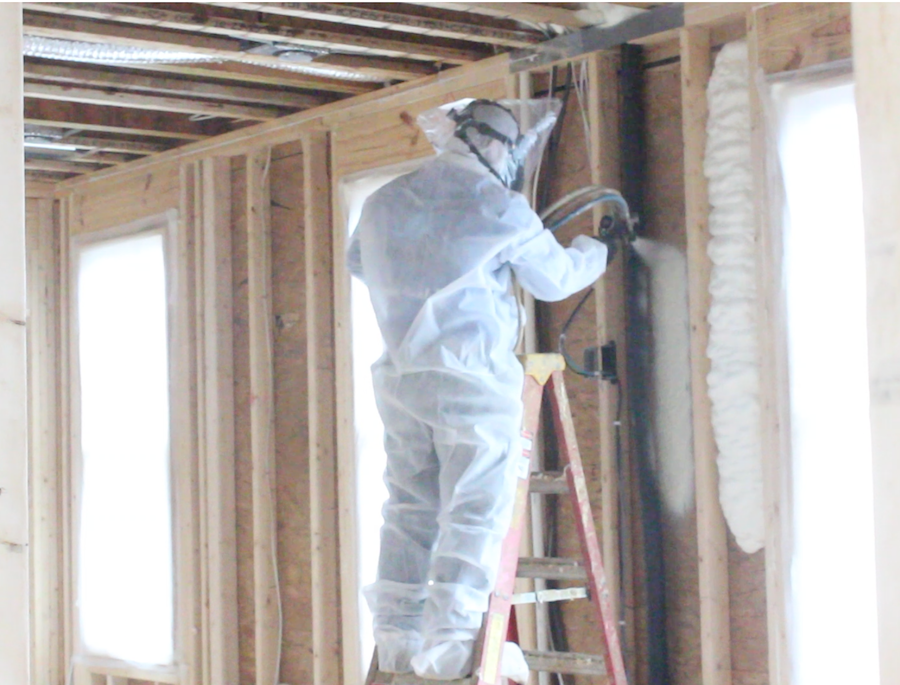 Welcome to this edition of the Louisville Custom Home Builder podcast series, brought to you by Louisville’s leading luxury construction team, Artisan Signature Homes. I’m Greg, your host and for today’s episode, we are joined by Louisville’s best known and most accomplished custom and luxury home builder, Jason Black. Jason, thanks for having me back out today. How are you?

Jason:    Greg, I’m doing very well this morning. How are you?

Greg:    Doing well. On the last podcast in your 101 Builder’s Series, you were talking about having the plumbers, and the electricians, and the HVAC guys all come out and I guessed incorrectly what came next. You said insulation, I think, is the next step.

Jason:    Yeah, so we’ve got all the rough-ins. There is a little bit of down time when we finish those rough-ins because we’re waiting on our inspections. We get the city officials that come in and they’ll inspect the electrical to make sure it’s up to code. They’ll inspect the duct work. They’ll inspect all the framing. Make sure that everything is not going to fall down or we haven’t missed any joist hangers or proper fire blocking it. It’s really for the homeowner’s protection. We get all those inspections. They inspect the fireplace. All the mechanicals get inspected.

Jason:    Yeah, they’re separate. The plumbing’s separate from the electrical, from the heating air and the framers. You got a couple different inspectors coming in there.

Greg:    When do you let them know that you’re ready for inspection? Do you have to wait until you’re actually done doing that step and then say, “Please come out.”, or do you put in a request ahead of time trying to time it so that they come in and you can minimize the down time?

Jason:    No, we usually have to be completely finished. Then we’ll call in the inspection. Sometimes they’ll come within a day and other times it may take several days or a week. It just depends if they’ve got training or whatnot going on. We usually allow a little bit of time. We can still do some work on the outside at this point, but usually it’s wait mode while we get those inspections done.

Once the inspections are done, we get all our green lights, we get our stickers, we then go full bore with insulation. Depending on if we’ve done the foam insulation or the blown in insulation or whatnot, at this point our contractor comes in. We’ll insulate the walls, insulate the ceiling, any voids, any crevices. They come through with the little foam gun and any penetration to the outside, we’re sealing up.

Greg:    You talked about insulation in one of your earlier episodes. You’re saying it doesn’t really matter what kind of insulation you do now, this is the time you would do it no matter what the client has chosen?

Jason:    That’s correct. No matter what we’re doing, now’s the time to get in there and get that stuff done. Once the insulation’s done, this is when we bring in Eric George, who has been on our podcast before and talked a little bit about his pre-drywall inspections. He’ll come in with his crew. They’re inspecting the job that our insulator has done. If there’s any voids in the insulation, any gaps, or if there’s going to be a hot spot in an attic, usually if there’s a vaulted ceiling or a bonus room over the garage. Any place that’s not just a box, it’s a tricky spot to insulate. That’s where Eric and his team really excels for us because what we want to do is produce a comfortable living space for our consumer when they move into their home. 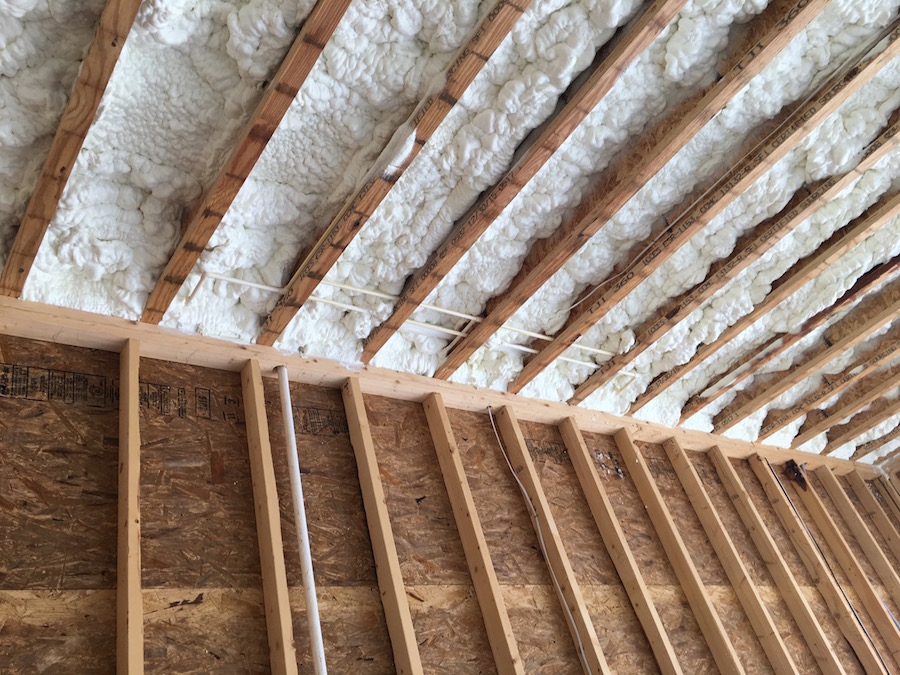 Greg:    When your insulation team is doing their work, I’m assuming here that they can do a visual, sort of an eye test, to make sure they have all the spots taken care of that look like they need to be taken care of. What is Eric doing that is different than that? How does he tell if there’s a little spot that was missed, or I think you called it a hot spot? How does he tell where those things are?

Jason:    His company, Building Performance comes in. Sometimes they’ll use heat guns, but usually it’s just their expertise. They’re looking at thousands of homes. They know what it takes to insulate the house properly. They’re going through it. He usually will take a sharpie and circle any area and then photograph it. He’ll create a log for us. No matter how good we think we are when we insulate these houses, I can never get past Eric. That’s why we hire him. It’s definitely not something that we have to do, but we like to do it.

Greg:    Do you share that list with a client to show that you’ve reached some level, or is that strictly for you and your team to come back through and it’s like a checklist? Let’s clean these up and then we’re ready to go to the next step.

Jason:    Yeah, we’re happy to share it with the client. Usually they’re there along the way that can see the process that what’s going on. Yeah, we’ll share any of the process we do. That’s why a lot of people choose Artisan. They know we’re going to go above and beyond to build them a home that’s going to create a good value and a comfortable environment for them.

Greg:    I’m just curious. I’m stuck on the insulation. I apologize. Let’s say you did not have Eric come in, but you’ve done a pretty decent job of insulation, but you’ve missed a few spots. Does that make a pretty noticeable difference? Is that something than an end user would notice?

Jason:    Yeah, so what can happen is once the drywall’s on, you’re in your environment and you’ve sealed up 95% of the home really good, and you’ve missed a couple spots. Those spots that are missed are really going to be exacerbated because there are voids in the wall. You might get a bigger draft, or a cold spot, or a hot spot in that wall. It will drift through to the closest outlet or penetration and start feeling that cold air come in.

Greg:    We like to make fun of my house a little bit. If I have a couple spots that kind of whistle because when the wind moves outside, are you saying that might not be sealed properly? Is that what we’re hearing?

Greg:    I need to have Eric come over to my house.

Jason:    Yeah, they can do renovation work, too. They’ll come into homes and that’s probably, I don’t what percentage of their work. A lot of time attics haven’t been insulated or they’re just poorly insulated. They can come in and tell you where the heat’s coming and going. Then our insulation contractor can come in and poke some holes and fill it with foam or fiberglass for you.

Jason:    Building Performance has come in. They’ve done their stuff. They’ve checked everything. Told us what we need. At that point, we’ll bring our insulation contractor back in, touch up anything. Then we’re ready for the next step which is … ?

Jason:    Not bad. You’re a good little student over there, Greg.

Greg:    If I guess drywall enough, eventually I was going to be right. 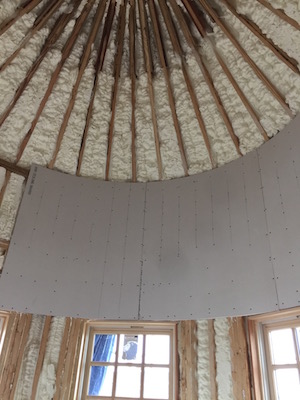 Greg:    Does the glue grab the nail as well as the board? Is that why you don’t see nail pops as much?

Jason:    It does. It just gets one cohesive system and it pulls it all in there nice and tight. Kind of the drywall process is they’ll hang ceilings, we’ll hang all the walls. Once all the walls are covered with drywall, we’ll come in, we’ll sweep all the floors. We’ll put down paper on the floor. Then we’ll begin the mudding process.

Greg:    Can I just say a couple summers I worked with a builder. I had to try my hand at drywall. It is so hard. Maybe I’m just skill-less, but it’s way harder than it looks.

Jason:    Yeah, you know if you’ve never tried drywall… Before I was a builder, I finished one of my basements. I tried to do all the work myself. Drywall was one of those things that I was like, “I could do it.” The hanging went okay, but once the mudding came in, it is no joke. You’ve got to get it just right. You can’t put in on too thick or too thin.

Greg:    I’m glad to hear that you weren’t just an ace out of the box. That it wasn’t a piece of cake for you.

Jason:    I highly recommend leaving drywall to the professionals. We’ll come in. We’ll mud the entire house. We’ll tape all the seams. We’ll put a couple coats of mud on. Then we’ll sand, another coat, sand. Between two to three weeks is what it usually takes to drywall. Talk about that emotional curve a little bit here. When drywall first goes up and gets hung, it’s pretty exciting. Then after two weeks of mudding, you’re like, “I’m tired of seeing mud. When’s the next step come?”

Greg:    What is the typical reaction, do you find from clients when they look in a house that’s just framed, and then it goes from framed to drywalled? Do people find that it looks bigger, that it looks smaller? Can they see their house coming together? Is it a good change? Are most people worried about the size of the house?

Jason:    A lot of time people are worried that, because when it’s framed up, a lot of times people do think the house is smaller than they think. Then once it’s drywalled, they’re like, “Oh my gosh, this is way bigger than I thought.” Because it really starts to define the rooms. When you don’t have the drywall up, you’re just looking through everything and you really don’t know where a room stops and starts really. That drywall really helps define the space.

Jason:    Yeah, there’s a mess, but the good thing is, we’ve rolled out tape and paper on the floor. We roll up the tape, sweep the floors, and then we’re ready for the next phase. That will be priming the walls and interior trim work, which we can probably get into next time.

Greg:    Before we jump there, what do the floors look like at this point as you head to the trim you’re saying?

Jason:    They actually look pretty good. We’ve used our AdvanTech, our 3/4″ subfloor. It sweeps up, cleans up real nice. Got a pretty decent smooth finish on. It’s actually not too bad.

Greg:    Wonderful. All right. Well, we will back next week with another episode of your podcast. I’m looking forward to learning more as always.

Jason:    We look forward to sharing with you, Greg.

Thank you for joining us on this episode of the Louisville Custom Home Builder podcast. If you’re looking to build a home and would like to reach out to Jason with any questions about the process, or maybe just your individual needs and desires, please visit the website at artisansignaturehomes.com. We appreciate your time with us today and look forward to bringing you another episode next week.