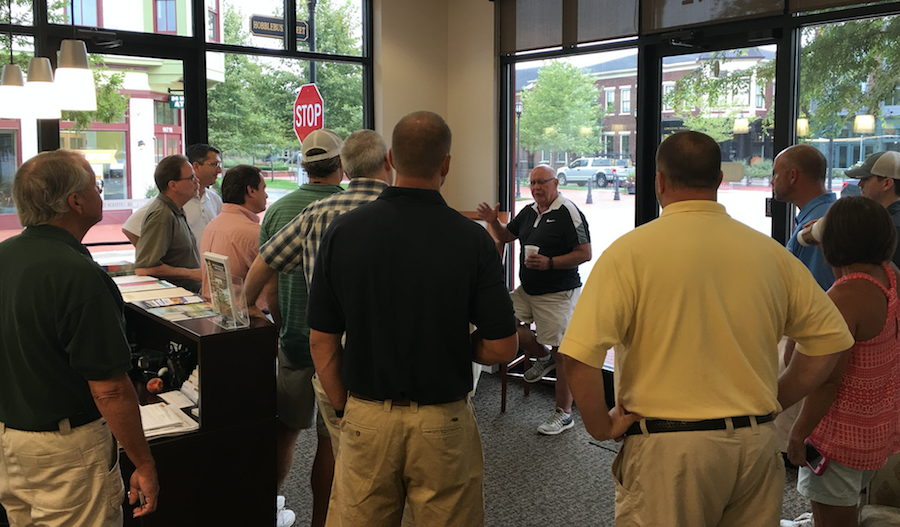 Jason:    Welcome back to another episode of the Louisville Custom Builder podcast. This is Jason Black, your host and today, I’m joined by Todd Wilson and Jamison Howard, two of my fellow Southern Living builders who are in town. We just finished a walking/golf cart ride tour of Norton Commons development. It was both of their first trip to Louisville. We’re going to get a recap of the development and what they thought. First, I’m going to introduce Todd, let him tell a little bit about himself and what he does. Then, we’ll get on to Jamison.

Todd:    Sure. This is Todd Wilson, I am a custom builder in Valdosta, Georgia, which is just right above the Florida line. We’re a smaller market. We do design build custom homes, and have been part of the Southern Living group now with you for a decade.

Jamison:    That is correct.

Jason:    We are in great company. All right, Jamison, go ahead. Maybe I stole your thunder.

Jason:    Fantastic. Guys, I really appreciate you guys coming to Louisville, and seeing our work, and specifically touring Norton Commons. We had the pleasure of having David Tomes, who is the visionary behind Norton Commons and the development. It’s so cool for me, I’ve been building houses in there for 10 years. I learn something every time I take one of these tours. Todd, why don’t you give me your insight on what you thought of the tour of Norton Commons as a whole.

Todd:    Overall, it was probably the best example of a planned community that I have personally seen. I enjoyed that tour as much as anything I’ve enjoyed from a professional standpoint, and just seeing things that are done right, and done well, and well thought out as much as anything in the last decade. The attention to detail, the unwavering commitment to that detail, and to that design, and to the standards has created a project that is really, really special.

Jason:    One of the things I learned today is they first started the development back in 1997. I think he said today they didn’t build their first house until 2005, so you’re talking eight years of planning goes into it. With economic ups, and downs, and everything, it’s pretty remarkable the development has made it through that and really thrived through all the ups and downs. I thought that was pretty cool.

Jason:    Jamison builds in Charleston, South Carolina. He’s got some similar developments. I’ve had the pleasure of seeing some of his beautiful work in person. What did you think of Norton Commons compared to some of the stuff you have, maybe, on Daniel Island or I’On in South Carolina?

Jamison:    We’ve had the pleasure of building on Daniel Island, which is a peninsula island just northwest of Charleston, a very similar development. It’s always nice to ride around, particularly with the developer and hear their initial vision for community, and also start to realize their abilities to fulfill that vision. I think that was the most important part to me as part of our tour that we took today that all the planning that goes into something like that, you think about the time components to it as well, but to put together a staff and lead designers to put something like that together, and to have the best designers possible throughout the country to come together to do that type of project is amazing. 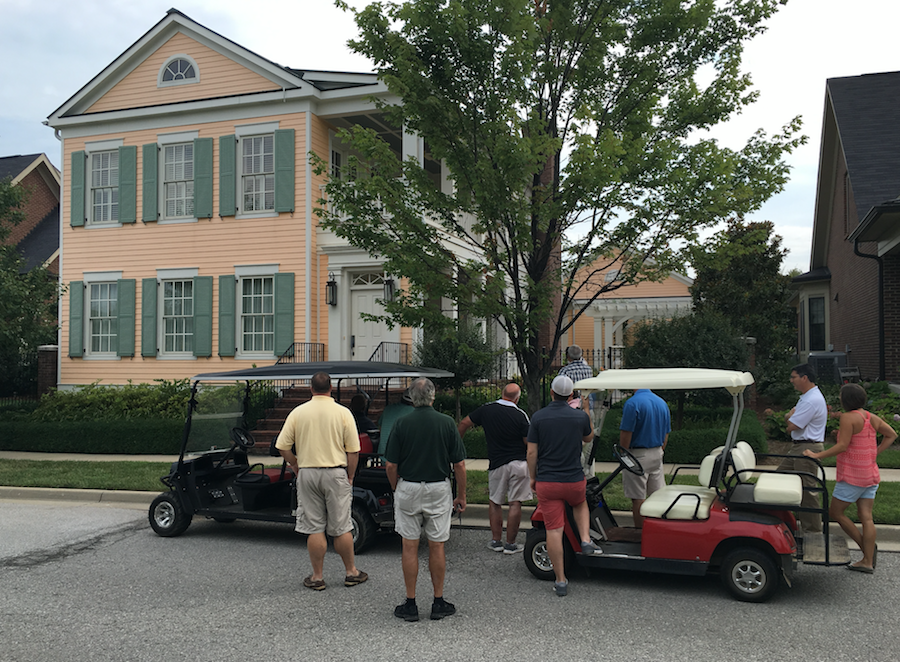 Jason:    Cool. One of the things that we saw on our tour today, I always talk about the stuff I learned and thought it was pretty neat, is we’re encouraging people to walk the neighborhood streets. We want your kids to feel comfortable. As we walked through the streets today, David Tomes pointed out that all the streets have a subtle curve, and all the stop signs, the streets are offset just a little bit to try to discourage the traffic from just speeding through the neighborhood. It was interesting.

The developer was saying that he had fought downtown, the Plan and Zoning Commission. They wanted straight streets, and 90 degrees, and everything else. He held to his guns. It’s fun to see a walkable community that you don’t have to risk your life when you walk across the street, because speed limits are 10-15 miles an hour through there. Other than a few large stretches, most of the time the cars are stopping pretty periodically. I thought that was pretty cool.

Todd’s telling me he’s wanting to move his practice here and start building houses in Louisville, he’s a big fan of Norton Commons. No, I’m just teasing. We showed these guys the pattern book, and wanted to see what you guys thought about … One of the great things about Norton Commons is the architectural detail and the styles we have. We have a developer that enforces it, but it is very critical to follow that pattern book. I know you guys were checking out that pattern book. What did you all think about that?

Todd:    The pattern book is so important to maintaining consistency across different builders, and different styles, and tastes. Steve Mouzon, who I know was part of putting that pattern book together, he’s a classicist. He has gone to school on proportion and design that reaches all the way back to the Greeks. When we look at something like Norton Commons, what you notice is what you feel. The feeling comes from good design and good details, column placement, column sizing, proportion, scale of houses, massing, everything that is part of that book. You live that out as you drive down the street.

Municipal people think, typically, in terms of straight lines and ease of use, but the artistic has to come into it in order for you to feel it. I think Norton Commons has done a fantastic job of making a very workable design, but a very livable neighborhood.

Jason:    One of the great things about the tour today is, I think we toured the Fire House. I think the group was like, “I’ve never seen a Fire House that looks like that.” We’ll throw some pictures up on the podcast so you guys, listeners, can see what the Fire House looks like. Norton Commons donated the land to try to get the Fire House to come to the community. They did come. Their original design was a typical fire station that just was not very appealing. 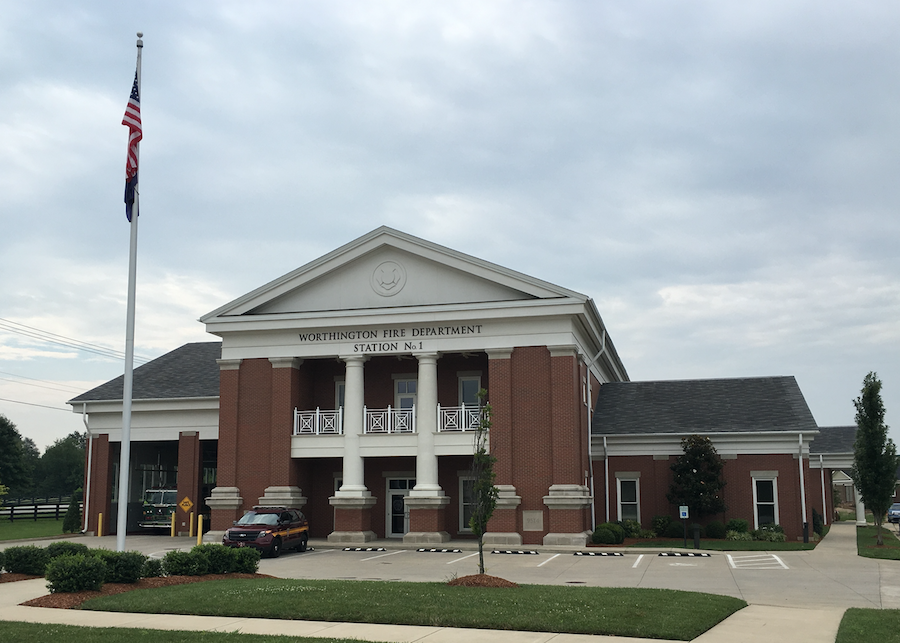 Mike Watkins, who’s the town architect, had done some studying and gave them some suggestions, and maybe more recommendations on what to make this building look like. It’s probably one of the coolest, well detailed fire houses that I’ve seen. All the civic buildings, they’re just getting ready to open Norton Commons Elementary, it’s going to be a 600-800 student facility. The timeless architecture of the school blends right into the neighborhood, which is nice. In Charleston, Daniel Island, do they have a school in there as well?

Jamison:    They do. There are two schools. There’s a county public school, which goes kindergarten through 8th grade. Then, there’s a private catholic school that’s a high school.

Jason:    A lot of people in Norton Commons when they visit are amazed at the retail space, and the amount of businesses and restaurants that the neighborhood can support that. Do the T&D type neighborhoods in Charleston have that type of retail as well?

Jamison:    They do. Daniel Island, in particular, is definitely a live there work there development, and a fantastic town center, which also creates a destination for people to come shopping or for dinner from other parts of Charleston.

Jason:    Cool. Now Todd, you guys don’t have anything like this down in Valdosta, do you?

Jamison:    We do not. In fact, there’s been opportunities to do it. What I spoke to of developing standards, and being willing to stick to them regardless of the economy or whatever, that’s what David and his team have been able to do throughout the different markets of which this project’s being developed is really special. Once you let the standards begin to slip, you lose that commonality that makes it a community.

Jason:    That’s one thing, as being a builder here for over 10 years, is the developer and their staff, they really do enforce the code. I’ve torn out many a details that have been done incorrectly. The code book is so thick, sometimes there’s stuff that you just don’t realize that you’re supposed to do, whether it’s trimming out the window properly, or having the eave set just right, or having two garage doors on the alley instead of one big one, it’s just meant to have smaller openings. There’s always something to learn.

Jamison, I hope you enjoyed … I think we stopped and checked out, there were a couple of houses that were inspired by homes down, I guess, in the Charleston area, maybe downtown Charleston. It may not be quite on Broad Street, but maybe it made you feel like home a little bit.

Jamison:    It did. It was really nice to see a lot of the detailing. Any community like that, you need to span different markets and different price points to be a true community. It was done very, very well.

Jason:    As we wrap up this podcast, maybe I’ll have each of you give me one thing that when you leave Louisville and go back to your home states, maybe a takeaway from Norton Commons, or even you guys just toured Homearama. Tell us what you’re going to take back from your time here. Todd, we’ll let you start, put you on the spot.

Todd:    Okay, thank you. I will take back with me images of architectural details done correctly, and the overall impact that continued and repeated correctness, in terms of those details, the effect is has on the feel of the community.

Jason:    Fantastic. Jamison, how about yourself?

Jamison:    I always like to take back different components that translate well to our market. This was certainly a great experience. I have plenty of ideas to take home. I did, very much, enjoy our tour this morning, especially some of the things that the developer is doing in terms of sustainable building and geothermal integration into his development plan. I have some great ideas.

Jason:    The geothermal has been, as a builder, it’s extra costs, do we want to make the houses more expensive? After adopting it, and we’ve built probably a dozen or so houses in the new section, it sure makes a nice quiet outdoor space. The homeowner gets a very efficient house with it. Anyway, thank you guys so much for joining us today. I really appreciate your time and expertise. Maybe we’ll have you back on some time in the near future.